Alcuin: lament for a nightingale.

One of the foremost scholars during the Carolinian Renaissance was Alcuin of York (735 – 804), probably the greatest intellectual of his time.  Apart from his theological works, he has also left a number of poems, of which this poem about a nightingale (luscinia) is particularly charming. One can imagine Alcuin sitting in his monastic cell enjoying the song a nightingale and suddenly that uplifting voice during a period of distress has gone. Was it written after the Vikings had ransacked Lindisfarne in 793?

Written for his lost nightingale

WHOEVER stole you from that bush of broom,
I think he envied me my happiness,
O little nightingale, for many a time
You lightened my sad heart from its distress,
And flooded my whole soul with melody.
And I would have the other birds all come,
And sing along with me thy threnody.

So brown and dim that little body was.
But none could scorn thy singing. In that throat
That tiny throat, what depth of harmony,
And all night long ringing thy changing note.
What marvel if the cherubim in heaven
Continually do praise Him, when to thee,
O small and happy, such a grace was given? 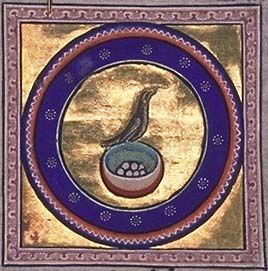 Email ThisBlogThis!Share to TwitterShare to FacebookShare to Pinterest
Labels: alcuin

The Legenda Aurea written by Jacobus de Voragine (1228-1298) was to some extent the 1001 Nights of Mediaeval Europe: all kinds of stories and anecdotes in some thousand pages. Its content though was not just amusement but also, or even more, exempla of miracle and devotion for the Christian laity.
Believe in demons was part of everyday Christianity and it must have been a reassuring thought that these could be driven away, as Saint Andrew does in this excerpt. From a modern perspective it has a strange ending: why would the apostle revive the son on the condition that he, the son, would follow the holy man? Such ethical considerations would not have bothered the audience, glad as they were to hear a miracle.
Legenda Aurea De sancto Andrea apostolo  (fragment).

The translation is adapted from William Caxton’s Middle English edition.

(After this,) as the apostle was in the city of Nice, the citizens said to him that there were seven devils without the city, by the highway, which slew all them that passed forthby. And the apostle Andrew commanded them to come to him, which came in the likeness of dogs, and sith he commanded them that they should go whereas they should not grieve ne do harm to any man; and anon they vanished away. And when the people saw this they received the faith of Jesu Christ. And when the apostle came to the gate of another city there was brought out a young man dead. The apostle demanded what was befallen him, and it was told him that seven dogs came and strangled him. Then the apostle wept and said: O Lord God, I know well that these were the devils that I put out of Nice; and after said to the father of him that was dead: What wilt thou give to me if I raise him? And he said: I have nothing so dear as him, I shall give him to thee. And anon the apostle made his prayers unto almighty God, and raised him from death to life, and he went and followed him.