Petronius: Cena Trimalchionis 66: what did you have for dinner?

The parvenu Trimalchio – possessing far more money than good taste - gives a lavish dinner. A certain Habinna arrives late as he had a dinner elsewhere first. Far from sober he enters the dining room, supported by his wife Scintilla. Trimalchio asks his newly arrived guest what he had had for dinner. What follows is a hilarious description, reminiscent of what nowadays can be seen at all you can eat restaurants or buffets at holiday resorts.
The writer of the Cena Trimalchionis – part of a larger work, the Satyricon - was Petronius Arbiter, a high official under Emperor Nero and a witty commentator of Roman society and the nouveaux riches – and a dandy himself and connoisseur of good taste (arbiter elegantiae). The narrator of the Cena Trimalchionis is his alter ego, the intellectual Encolpius. Petronius’ close connection with Nero turned out to be fatal: at some point Nero mistrusted everyone in his inner circle and so Petronius shared his fate with Seneca: enforced suicide.

in cena: for dinner
inquit: subject Habinna
bonae memoriae: (genitivus qualitatis) I am of such good memory = I have such a good memory
frequenter: constantly
in primo: at first
porcus: pig, pork
botulus: sausage (some older editions have poculo, calyx, cup)
sangunculum: blood sauce, blood sausage (the exact meaning is not quite clear)
gizeria (sg. gizerium): intestines, giblets of a bird
beta: beet
autopyrus: made of whole-meal flower, standard bread
de suo sibi: (sc. factum): made by his own (kitchen)
candidus: white-bread
vires facit: it makes you strong
et cum mea re causa facio, non ploro: and because when I have to shit (sua re facio), I don’t cry (from exertion)
ferculum: a dish on which food is served; and hence a dish or mess of food, a course
scriblita: a kind of cheese tart
mel mellis (n.): honey
caldus (= calidus): warm
infusum excellente Hispanum: excellent Spanish wine poured over (excellente as if analogous to dulcis. Petronius makes fun of the problem  some speakers of Latin had with  the right declension)
quidem: in fact, indeed
edo edi esum: to eat
me usque tetigi: till I had smeared myself (completely with honey)
circa (sciribilita erant)
cicer ciceris (n.): chickpea
lupinus: wolf-bean
calva: hazelnut
arbitratu: at choice
tollo sustuli sublatum: to take away
mala singula: an apple (malum) for everyone
in mappa aligata: in a napkin which is bound together
munus muneris (n.): gift
vernula: lover boy-slave (a meaning only hinted at in older translations)
convicium: outcry, quarrel
domina mea: my misses (does bene admonat refer to the previous sentence or the following? That Habinna had to be reminded by his wife to bring something for his lover has certainly a comic touch))
in prospectu: at a distant view (i.e. at another table)
ursinae frustum: a piece of bear’s meat
imprudens – entis: heedless, unaware
gusto (-are): to taste
libra: pound
comedo = edo
aper apri: wild boar
sapio sapivi (-ere): to have the taste of
homuncio –onis (m.): little man (but in everyday Latin the diminutive has probably lost its literal meaning)
in summo: finally, as desert
caseus: cheese
mollis mollis: soft
sapa: must, new wine boiled thick (ex sapa, it has been suggested to read et for ex, but it is probably kitchen language: soft cheese in a sauce of must)
coclea: snail (escargot, still used in the French kitchen)
corda = chorda: intestine (as food)
hepatia: liver
catillus: a small dish
ova pilleata: eggs with a head of dough
rapa (= rapum): turnip (a kind of carrot)
senape (no declension): mustard
catillum concacatum: a dish of shit (referring to its look, not to its taste – I presume)
pax Palamedes: enough! (pax is an injunction and has no relation with pax `peace’. Pax Palamedes probably because of the alliteration)
alveus: tray
circumfero –tuli –latum: to carry around
oxycomina: pickled olives
improbus: shameless (some editions have improbe)
ternos pugnos: three fistfuls
Nam pernae missionem dedimus: for we had the ham go (missionem do: to dismiss, to give demission to)
Translation by William Stearns Davis (1913)

"But," demanded Trimalchio, "what did you have for dinner'?" "I'll tell
you if I can," answered he, "for my memory's so good that I often forget
my own name. Let's see, for the first course, we had a hog, crowned with
a wine cup and garnished with cheese cakes and chicken livers cooked well done, beets, of course, and whole-wheat bread, which I'd rather have
than white, because it puts strength into you, and when I take a crap
afterwards, I don't have to yell. Following this, came a course of
tarts, served cold, with excellent Spanish wine poured over warm honey;
I ate several of the tarts and got the honey all over myself. Then there
were chick-peas and lupines, all the smooth-shelled nuts you wanted, and
an apple apiece, but I got away with two, and here they are, tied up in
my napkin; for I'll have a row on my hands if I don't bring some kind of
a present home to my favorite slave. Oh yes, my wife has just reminded
me, there was a haunch of bear-meat as a side dish, Scintilla ate some of
it without knowing what it was, and she nearly puked up her guts when she
found out. But as for me, I ate more than a pound of it, for it tasted
exactly like wild boar and, says I, if a bear eats a man, shouldn't that
be all the more reason for a man to eat a bear? The last course was soft
cheese, new wine boiled thick, a snail apiece, a helping of tripe, liver
pate, capped eggs, turnips and mustard. But that's enough. Pickled
olives were handed around in a wooden bowl, and some of the party
greedily snatched three handfuls, we had ham, too, but we sent it back." 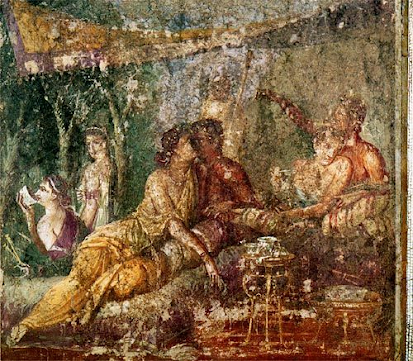 A fresco at Pompei.
Posted by the latin reading blog at 06:23 No comments: