Yesterday Sinterklaas has arrived in the Netherlands. Who? Well, Saint Nicolas, the patron of sailors, thieves and children. Every year around this time he arrives from Spain with his ship and leaves in the night of 5 to 6 December. As long as he is here, children, when going to bed, can put now and then their shoe next to the chimney (by lack of chimneys the central heating is also allowed) and the next morning they find a small present in it. On the evening of the 5th of December there is the grand finale: Sinterklaas is then celebrating his birthday, but instead of accepting presents, he gives presents away to children!
Various things are utterly wrong from a historical point of view: he is not from Spain, but from Asia Minor, it is not his birthday, but his death that is celebrated on the 6th of December - in earlier times a new day started at the sunset - and finally, he is not alive anymore. My parents told me that when I was 7 or 8 and as a staunch believer in Sinterklaas I was shocked. My dear daughter spoiled the fun for me when she was 6. Having watched the arrival of Sinterklaas at the place where my parents live, she said: `Dad, it is impossible that the same man arrives in various places at the same time and besides he has a false beard!’

Contrary to many early saints, Saint Nicolas was real, living from 270- 6th December 343. He was bishop of Myra, modern-day Demre on the Turkish Mediterranean coast. He was from rich parents and used his wealth to help poor people. That is to say according to legend, but as after his death his tomb soon became a pilgrim place, he must have been a remarkable man and there might well be some truth in the legend. Saint Nicolas has become one of the most popular saints both in the Catholic Church and the Orthodox Churches.

It is from Sinterklaas that Santa Claus has been evolved, that obese and ugly fellow. When in 2000 the Russian government donated a statue of Saint Nicolas to Demre to be put in the centre of the city, the following happened (I quote from the wiki link below): `In 2005, mayor Suleyman Topcu had the statue replaced by a red-suited plastic Santa Claus statue, because he wanted the central statue to be more recognizable to visitors from all over the world. Protests from the Russian government against this action were successful only to the extent that the Russian statue was returned, without its original high pedestal, to a corner near the church.’ How tasteless!

The following extract is taken from the Legenda Aurea by Jacobus de Voragine (1228/9 – 1298). The Legenda Aurea is a large collection of the lives of saints and became widely popular in the late Middle Ages. To be honest, after reading 3 lives it becomes pretty boring and predictable.
Saint Nicolas hears that out of poverty one of his neighbours has no other option but to let his three daughters work as prostitutes. He decides to help the poor children.

Translation (the extract is the third paragraph)
http://www.catholic-forum.com/saints/golden133.htm 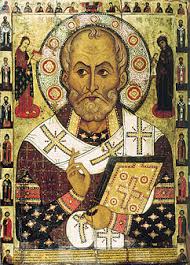 A Russian icon of Saint Nicolas from 1294

Posted by the latin reading blog at 07:33