Vita Columbae c.23. St. Columba takes leave of his horse before his death.


The nice thing about mediaeval Latin is that it is often not that difficult. This piece of Latin is far less difficult than my previous post. It is a charming story about St Columba, founder of the monastry on the isle of Iona. He was born on 7 december 521 in Ireland and passed away onn 8 june 597 in front of the altar at his monastry. On the morning 0f 7 december 597 he returns to his moneastry with his servant Diarmuid, after having blessed a barn. At that blessing God revealed to him that he would die that night. On his way home he meets his old horse, who wants to take leave of his master for the last time.
The text is taken from the Vita Columba c.23, by Adomnan of Iona (627/8-704). 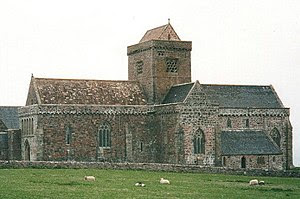 The abbey at Iona, founded by Saint Columba.

Posted by the latin reading blog at 11:26 No comments:

Gaius Suetonius Tranquillus (69-122) was a Roman historian, who wrote biographies of  twelve Roman caesars, starting with Julis Caesar and ending with Domitian. He had a great preference for gossip and saucy details, making him more a journalist of The Sun than  ofThe Independent. For this reason his trustworthyness is doubted, but without Suetonius, Robert Graves could never have written his I Claudius!
The gossip and saucy details are especially evident in the biographies of those emperors he disliked, like Nero (37-68). Nero came to power at the age of 17 and as a young emperor he liked to roam incognito the streets of Rome after dark and beat up people, as Suetonius tells us.
The Latin is not exactly simple, but here is a link to a translation:
http://www.perseus.tufts.edu/hopper/text?doc=Suet.+Nero+26&fromdoc=Perseus%3Atext%3A1999.02.0132

I have given a lot of words, but when you need to know more, load the Latin text on the site obove (upper right), click on the Latin word and you will be connected to some dictionaries.

Email ThisBlogThis!Share to TwitterShare to FacebookShare to Pinterest
Labels: suetonius


Whenever the Carmina Burana is mentioned, the music by Carl Orff will come to mind. It is less known that Orff only orchestrated 24 of the 228 songs and that many of these songs have their own musical notation in the manuscript of the Carmina Burana. This song was not selected by Orff.
Song nr 211 is a parody on excessive eating and drinking, but I think that for many people in the Middle Ages this would have been a dream come true, as there were often food shortages. It is therefore not surprising that the idea of  the land of Cockaigne, in which one only had te open the mouth and fried chickens were flying in, was much cherised at that time. Try to imagine that all of a sudden a person  from the Middle Ages would be here: where would he run to? Indeed: the Mcdonnalds!

Here is a live performance of this song by a Serbian early music group:

Unfortunately, I was unable to find an english translation on the internet. Is anyone able or willing to make a poetic translation in english?

sic me procuro,
ut in pace in id ipsum
molliter gerens me ipsum
super potum, super escam
dormiam et requiescam
The Latin is not difficult, but unclassical. Literally: so I take care (procuro), that in peace handling myself gently after drink and food, I will sleep and rest.
Line 3 and 6 are taken from Psalm 4:9:
In pace in id ipsum dormiam et requiescam
The in id  ipsum is a bit problematic. It is a literal translation of a hebrew word meaning `together’, `at once’, a particle implying that  both actions take place at the same time, but in Latin it gives little sence.


Publius Ovidius Naso (43 BC – 17/18 AD) -  Ovid for the English speaking world – is well-known to every student of Latin because of his Metamorphoses. With Caesar and Livy he belongs to the authors who are read at an early stage of learning Latin, but whereas the other two have often been cursed by students for their long sentences and boring descriptions of battles, Ovid has been popular through the ages because of his vivid descriptions of myths in the Metamorphoses.
Between his 17th and late twenties he wrote his first collection of poems, the Amores, a series of love-poems in 3 books. They are dedicated to Corinna, a young married woman with whom Ovid had an affair and in which he describes their encounters. There has been much speculation about  the identity of Corinna, which was certainly not her real name  It is however quite possible that Corinna was purely a literary construction.
In Amores 5.1 Ovid describes an encounter with Corinna in his room on a warm summer afternoon. I think there is hardly a poem which describes with more passion and eroticism the meeting of two lovers.

This is how Christopher Marlowe (1564-94) has translated this poem:

In summers heate, and midtime of the day,
To rest my limbes, uppon a bedde I lay,
One window shut, the other open stood,
Which gave such light, as twincles in a wood,
Like twilight glimps at setting of the sunne,
Or night being past, and yet not day begunne.
Such light to shamefaste maidens must be showne,
Where they may sport, and seeme to be unknowne.
Then came Corinna in a long loose gowne,
Her white necke hid with tresses hanging downe,
Resembling faire Semiramis going to bed,
Or Layis of a thousand lovers sped.
I snatcht her gowne: being thin, the harme was small,
Yet strivde she to be covered therewithall,
And striving thus as one that would be cast,
Betrayde her selfe, and yeelded at the last.
Starke naked as she stood before mine eie,
Not one wen in her bodie could I spie,
What armes and shoulders did I touch and see,
How apt her breasts were to be prest by me,
How smoothe a bellie, under her waste sawe I,
How large a legge, and what a lustie thigh?
To leave the rest, all likt me passing well,
I clinged her naked bodie, downe she fell,
Judge you the rest, being tyrde she bad me kisse.
Jove send me more such afternoones as this.

But now the Latin!

aestus             summer
exigo               to pass.
The day has passed the middle hour, not the middle of the hour, but in the next line medio toro is an urbs condita construction
membra levanda        limbs to be lightened i.e. limbs to rest
torus               bed, sofa
Pars adaperta fuit, pars altera clausa fenestrae
Roman houses had no windows of glass, but shutters with horizontal louvers to let light through. This gives the pattern of  light and shade making the room half dark Ovid is describing in lines 4-6
adapertus       open
quale fere       almost like
silva                wood
subluceo         shine a little, gleam
qualia sublucent fugiente crepuscula Phoebo: qualifying lumen in line 4
crepusculum   (evening) twilight
Phoebus          the sun
ortus               risen
verecundus     shy, modest
praebeo          to offer
qua abl.
latebra            hidding-place
pudor              shame
tunica recincta abl. covered (only) in an ungirded tunic
candida dividua colla tegente coma abl. abs: her hair which is divided in two parts is covering her white neck. colla is a poetic plural. Roman women normally wore their tunic girded and their hair tied in a knot. Both the loose tunic and the loose hair of Corinna imply sexual readiness. This is of course in sharp contrast with the timidus pudor in line 8!
thalamus         bedroom (thalamos poetic plural)
Semiramis was a legendary Assyrian queen - though derived from the real queen Shammuramat (824-811 BC). In legend she was a warrior queen, leading her army into battlefields and also a lustful queen, therefore Ovid describes her as formosa `beautiful’.
isse dicitur      is said to have come
Lais was a famous courtisan of Corinth said to be the most beautiful woman of her time, around 430-400 BC.
deripio            to tear off
nec multum rara nocebat Corinna’s tunic was thin (rara), so it didn’t do much harm in hiding her body.
pugnabat tunica sed tamen illa tegi in english wordorder: sed tamen illa pugnabat tunica tegi
pugnaba the imperfect denotes that she is trying to fight
tunica abl.
tegi passive infinirive of tego to cover
quae cum (but) since she
tamquam quae vincere nollet like one who doesnt want to conquer – unlike Semiramis!
non aegre       without difficulty
proditio, -onis betrayal
posito velamine abl. abs, `with her clothing put aside’
menda             fault, blemish
umeros           shoulder
tango tetigi tactum    to touch
lacertus          upper arm
papilla             nipple, breast
quam               how
premi passive infinitive of premo to press
planus venter flat stomach
castigatus here `slender, well-formed’
latus, lateris   flank
iuvenale as Roman girls married at the age between 14 and 16, this needs not to be mere flatering
femur, - oris   thigh
corpus ad usque meum = ad usque (close to) corpus meum
lassus             fatiguated, tired
requiesco requievi to rest
provenio         appear
medii dies: urbs condita construction
saepe              often